The strategic location of Minas Gerais

The state of Minas Gerais is located in the Southeast, the most developed and largest market region in the country (responsible for more than 50% of Brazilian GDP).

Its geographical position makes the state a corridor connecting various regions of the country, as it borders the states of São Paulo, Rio Janeiro, Espirito Santo, Bahia, Goiás, the Federal District (Brasilia) and Mato Grosso do Sul. Minas Gerais’ material and immaterial riches, as well as its enormous economic potential, demand that it take an increasingly strong strategic approach in terms of logistics structure, in order to be a catalyst for good business. 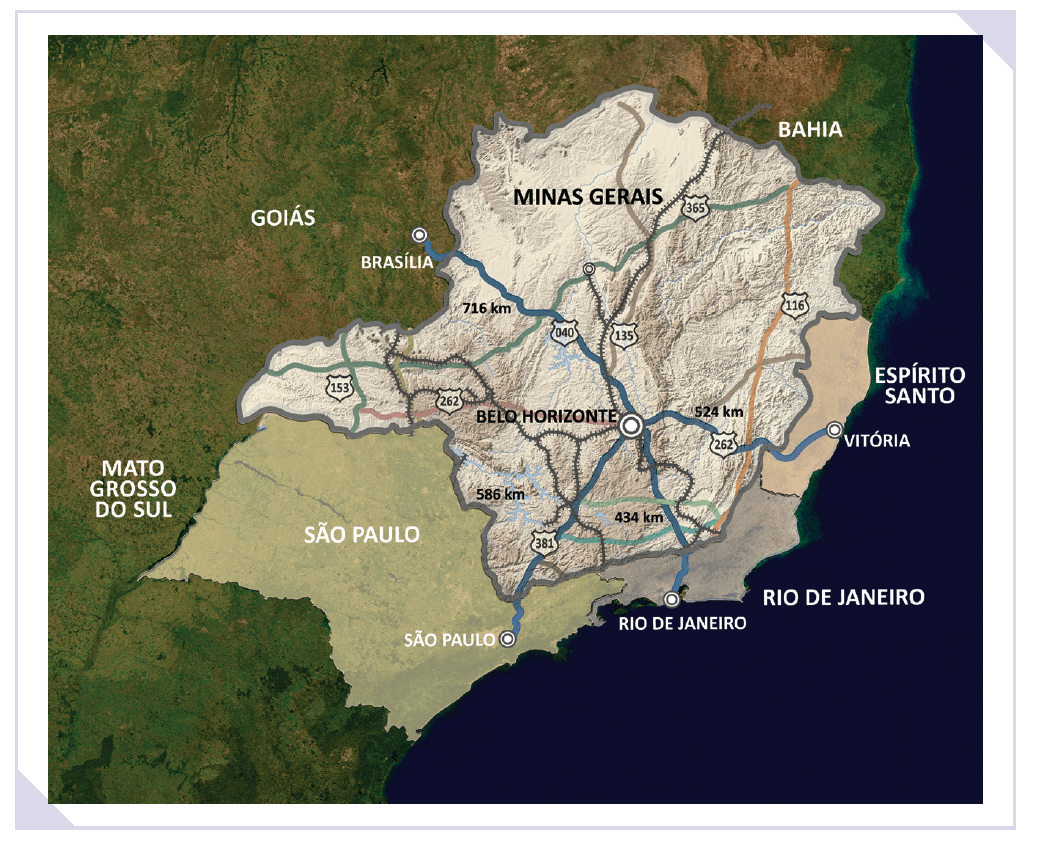 Minas Gerais has the largest road network in Brazil, equivalent to 16% of Brazil’s existing road network. In the state, there are 273,000 km of roads. There are currently two state road concessions granted in Minas Gerais, the MG-050, at 371 km in length, and the BR-135, at a total of 364 km.

The main highways that cross Minas Gerais are:

Fernão Dias Highway (BR 381): connects the metropolitan regions of Belo Horizonte and São Paulo and is one of the most important freight transport axes in all of Brazil. This highway crosses the South of Minas, the main coffee producing region in the world and has important
industrial parks;

Rio-Bahia (BR 116): connects the Northeastern regions to the South and Southeast of the country. In Minas, it runs through the Zona da Mata and the valleys of the Doce, Mucuri and Jequitinhonha rivers;

MG-050: State highway , with a total length of 406.7 km, connecting the Metropolitan District of Belo Horizonte to São Sebastião do Paraíso, a municipality near the border with the state of São Paulo.

In May 2019, the State Secretariat for Infrastructure and Mobility (Seinfra) launched the Road Concessions Program. The expectation is to attract investments of around R$ 7 billion through seven lots of state highways, besides generating more than 9,500 direct and indirect jobs, boosting regional development in the state. 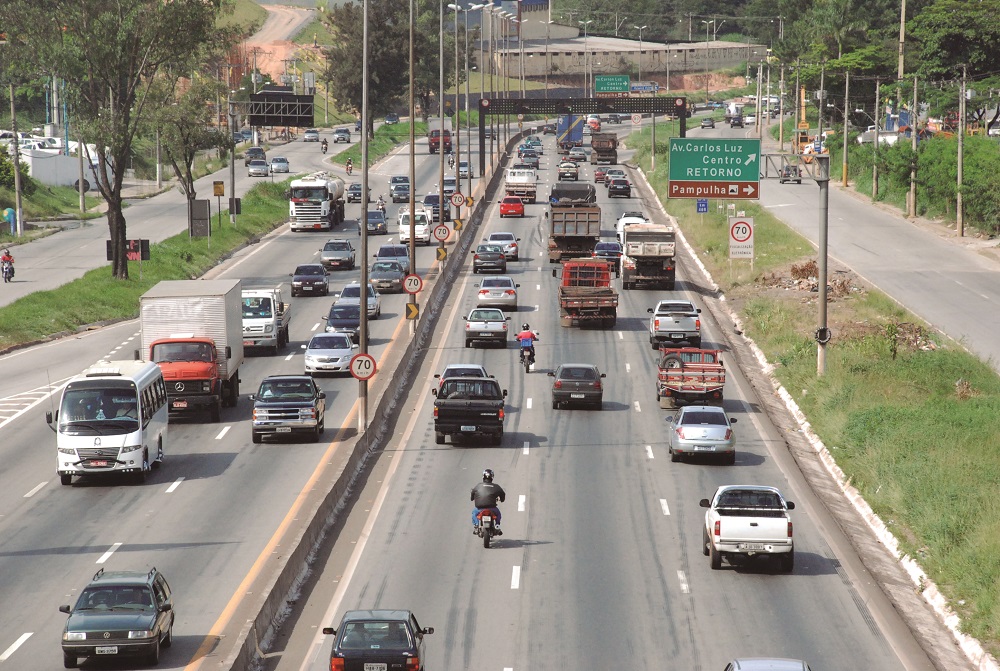 At a length of 2,500 km, the package involves concessions that will last 25 to 30 years and improve access to various regions of the state. More than 100 municipalities will benefit directly, representing about 30% of Minas Gerais’ GDP. 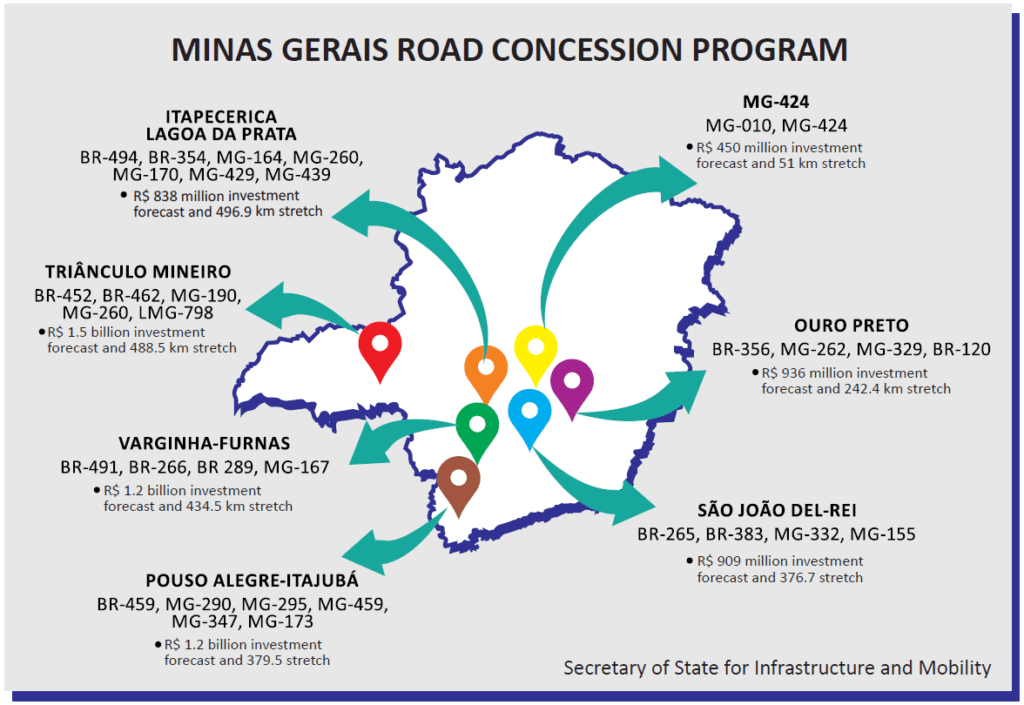 It is also planned to resume bidding for the lot composed of MG-424 – between MG-010 and the entrance to Sete Lagoas, a 51 km stretch. It is a way of attracting new investments to several locations in the central area of Minas, besides providing faster access to Belo Horizonte International Airport. 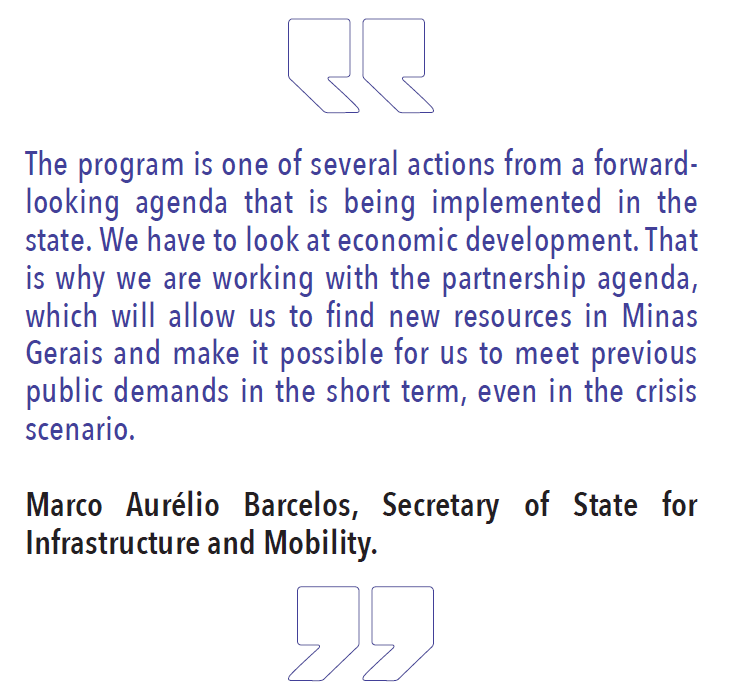 MRS is a logistics operator, utility company, which runs the Southeast Network of the now extinct Federal Railway Network (RFFSA). The railway network run by the company has strategic relevance for the national and state economies, considering:

-Geographic layout: 1,643 km in the states of Minas Gerais, Rio de Janeiro and Sao Paulo, connecting regions producing mineral and agricultural commodities, industrial parks, major consumption centers and five of the largest ports in the country, as well as transporting one third of all production and half of Brazilian GDP;

-Exports: almost 20% of national production and a third of the cargo transported by rail in Brazil;

The 905 km Vitória-Minas Railroad connects iron ore operations from the interior of Minas Gerais to the port of Tubarão, in the state of Espírito Santo. Cargoes transported are Vale’s iron ore and general cargo to third parties (coal and agricultural products).

The Centro Atlântica Railway – FCA , constituted by Vale, is a group of institutional investors in consortium that holds a controlling interest in Brazil’s largest 7,080 km railway, which serves the states of Minas Gerais, Goiás, Rio de Janeiro, Bahia, Sergipe and Distrito Federal, connecting them to the seaports of Rio de Janeiro, Vitória, Angra dos Reis and Salvador.

The FCA also connects MRS Logística to the Ferro Vitória – Minas Railway in Minas Gerais, through two lines: the Cerrado, Goiânia, Brasília and Belo Horizonte line serving the ports of Vitória, Tubarão and Barra do Riacho, for the transportation of agricultural products; and the Iron Ore Line, which connects the cities near Belo Horizonte to the states of Rio de Janeiro and  Espírito Santo, used to transport minerals, limestone and steel products, oil, cement, pig iron and grain. 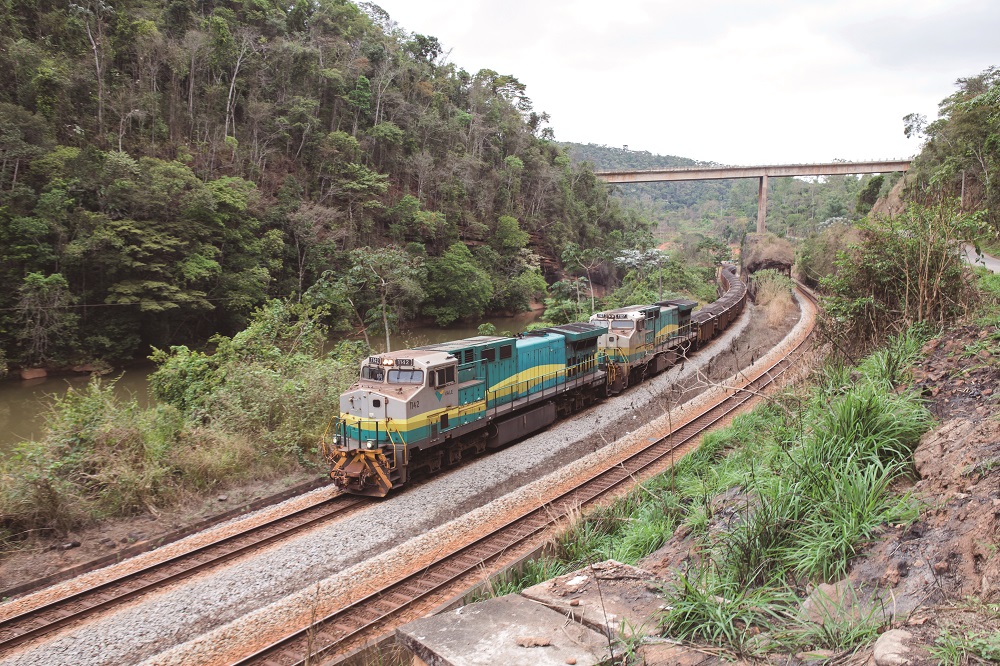 Belo Horizonte International Airport is the most important airport in Minas Gerais, located on the São Paulo – Rio de Janeiro – Belo Horizonte axis, the main consumer centers in Brazil, capacity of over 20 million passengers per year and full service environment, operating with more than 40 national and international destinations. It connects with manufacturing industries, hotels, commercial and residential development.

Managed by the concessionaire BH Airport and expanded in 2016, it is located in the municipality of Confins, 40 km from downtown Belo Horizonte. From Belo Horizonte International Airport, you can reach the main tourist attractions of Minas Gerais, such as Inhotim , Ouro Preto, Mariana, Congonhas, Sao Joao del Rei and Tiradentes (about 200 km). 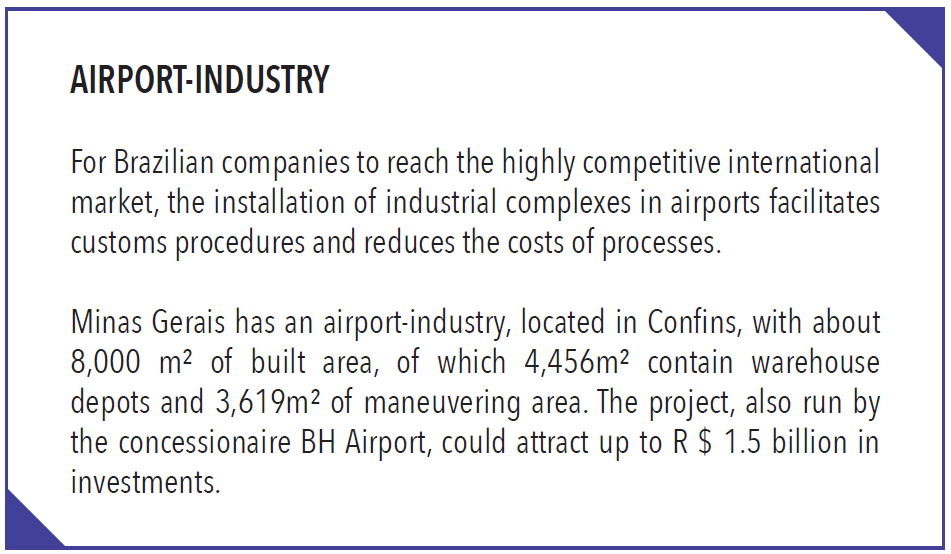 The city of Betim, in the Belo Horizonte Metropolitan Region, will have an aerodrome capable of receiving commercial and private flights. The space to be occupied by Inhotim Aerodrome is 4 km from Betim Center, 29 km from the central region of Minas Gerais’ capital and 15 km from Inhotim Institute, which will have direct access to one of the world’s largest contemporary art centers.

The runway is approved to host Boeing 737 aircraft, with capacity for 85 passengers and crew. The Inhotim Aerodrome will act as support for 40,000 takeoffs and landings. The project also includes the construction of 24 privately owned hangars and pilot schools.

Airports in the interior of Minas Gerais 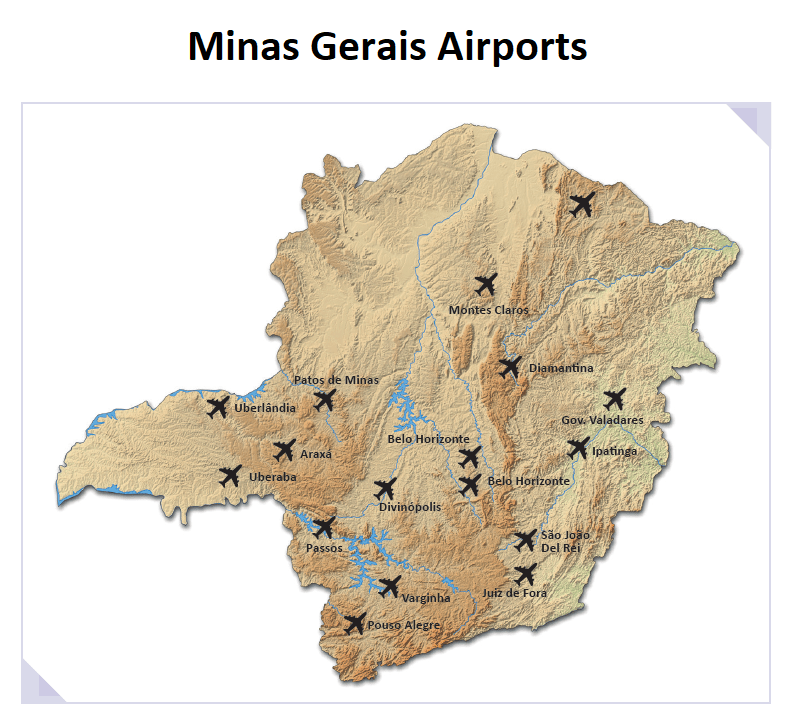 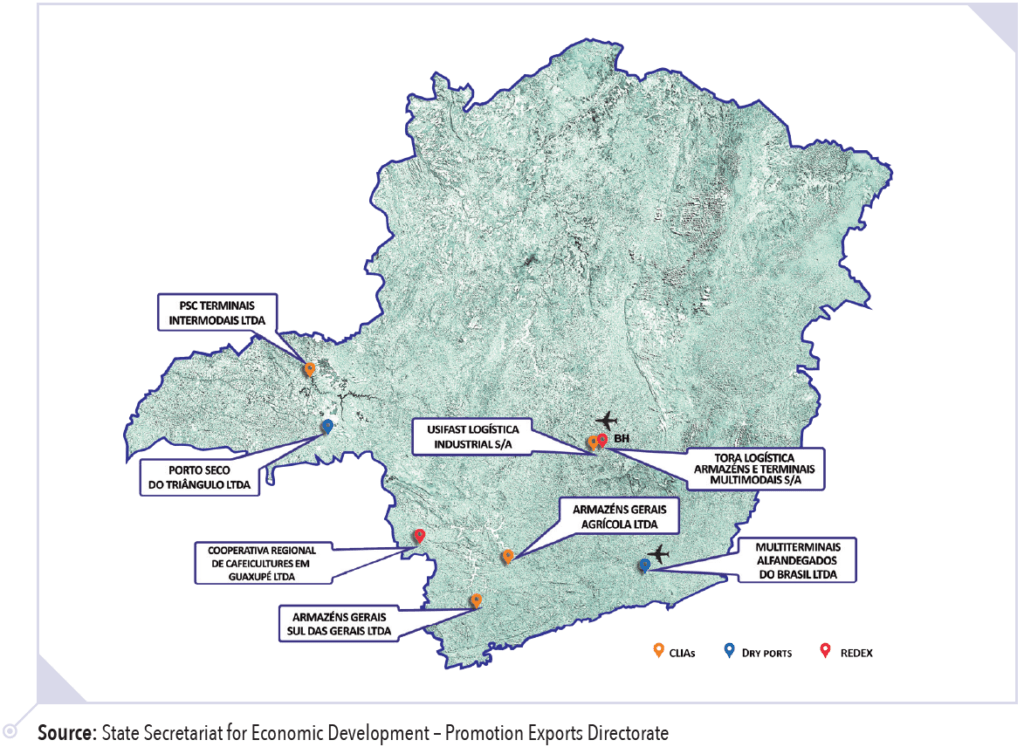 The Port of Santos, the largest port complex in Latin America, accounts for the movement of almost one third of Brazilian trade. Managed by the São Paulo State Dock Company (CODESP), it is located 70 km from the largest consumer market and producer in Brazil, São Paulo.

The Santos port complex connects to its area of primary influence, in which Minas Gerais is included, through a large network of railways and highways, which are part of the country’s main logistics chain.

Cargo from MRS Logística and Ferrovia Centro Atlântica S/A (FCA) branches is transported by rail to the complex, which is the largest exporter of coffee beans, soybeans, corn, automobiles and industrialized products in general.

The Port of Vitória, in the state of Espírito Santo, is home to the largest pellet producer in the world, the Tubarão Complex, where the largest rail yard in Latin America and eight Vale S/A pellet plants are installed, which jointly produce more than 20 million tons per year. 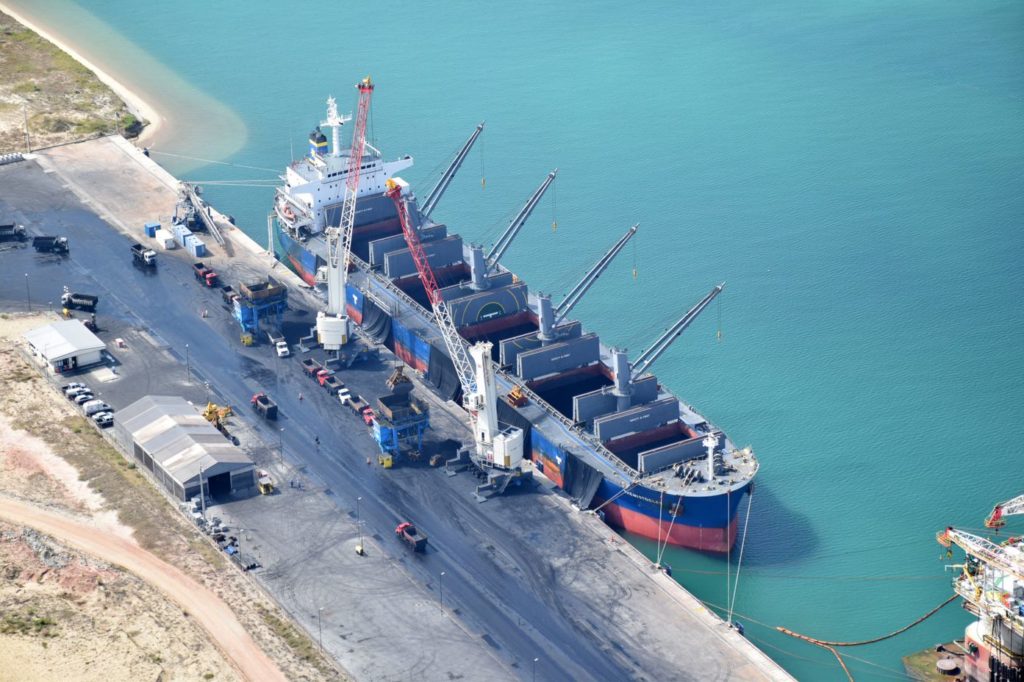 Photo: Port of Açu, in the city of São João da Barra, in the state of Rio de Janeiro.

Açu Port, a modern port-industry complex located in São João da Barra, north of Rio de Janeiro state and 123 km from the center of Campos Basin, has ample potential to optimize the logistics operations of companies in Minas Gerais, both as production outlet, and for the importation of inputs and resources.

In operation since 2014, it has a 90 km² port complex and two offshore and onshore terminals, housing the units of world leading companies in the maritime and industrial sectors. It is the only 100% private port in Brazil, with no waiting line for mooring. In the first half of 2017, the Açu Port reached an important milestone: 4th private terminal in terms of export cargo, according to the National Waterway Transportation Agency (ANTAQ) data.

In addition, Açu Port has the latest Export Processing Zone with port access under development in Southeast Brazil. It has an ideal profile to serve industries such as metalmechanics, mining, petrochemicals, ornamental stones and agro-industry, with infrastructure to add value to exports, in a solid production chain from Minas Gerais to the world.

It is a partner of Port of Antwerp International (PAI) – a subsidiary of the Antwerp Port Authority, Europe’s second largest port. In addition, Açu has entered into business partnerships with the Port of Houston (USA) and the Port of Guangzhou (China), consolidating itself as a worldclass port, connected to strategic international partners and following the latest global trends and innovations. 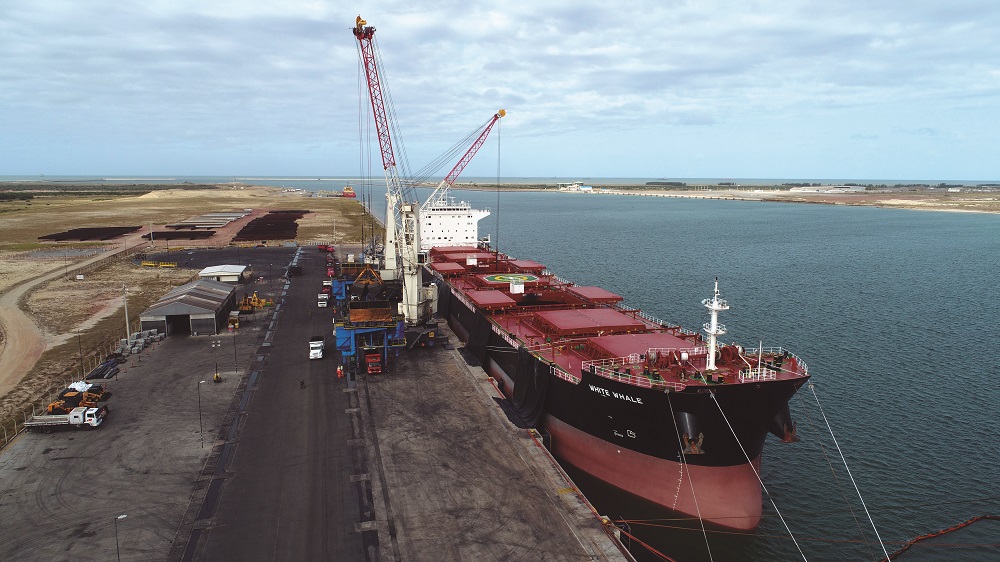 Photo: Prumo Logística. Port of Açu, in the city of São João da Barra, in the state of Rio de Janeiro.