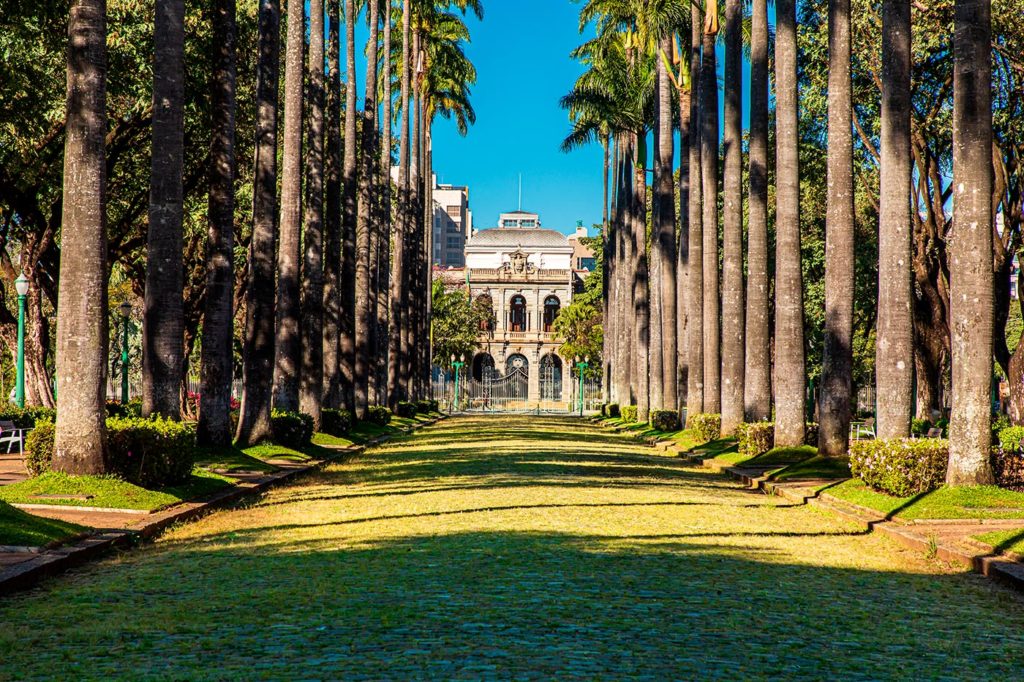 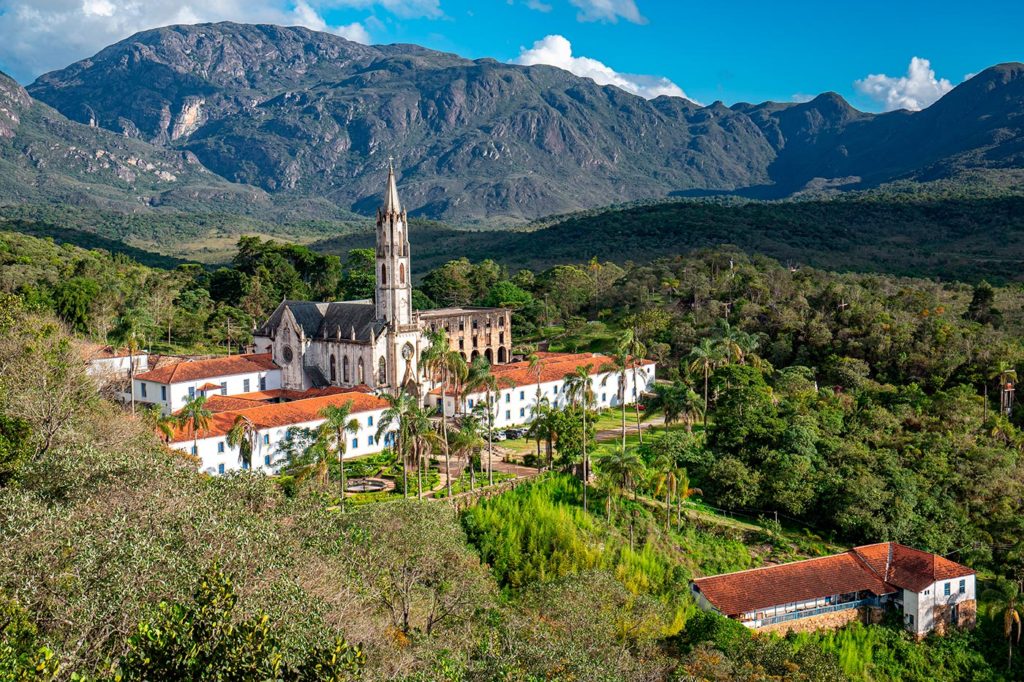 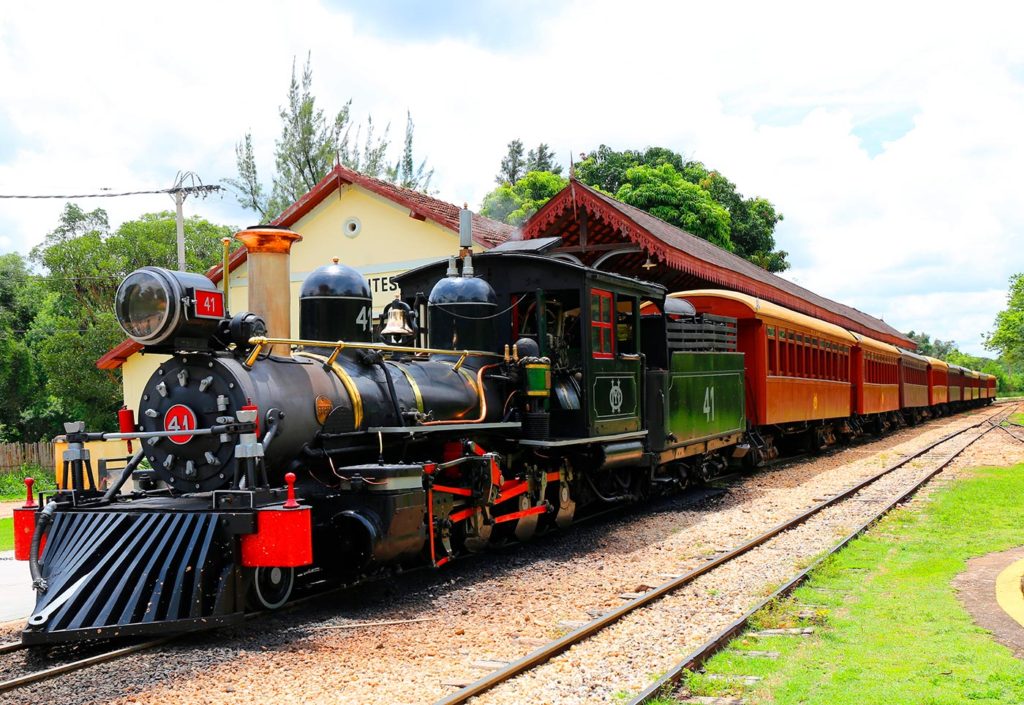 THE DIFFERENT REGIONS OF MINAS GERAIS

Due to its territorial extension (586,520 km²) and number of municipalities (853), Minas Gerais is divided into 12 mesoregions, with different cultural, climatic, and geographical characteristics. Each one of them developed in different ways as highlighted below:

Livestock is the economic basis of the region, even though industrial activities are still present, mainly in Barbacena and Lavras, which include companies in the cement, non-metallic minerals, auto parts, food, and footwear sectors.

Tourism is a growing economic activity in the Campos das Vertentes region. The cities of São João Del Rei and Tiradentes are the most important tourist destinations and receive increasing numbers of visitors, attracted by the great historical and architectural wealth of the Brazilian colonial period, combined with a calendar with cultural attractions and ecotourism.

This region is responsible for most of the iron ore mined in Minas Gerais, being explored by large companies such as Vale S / A and CSN. There are also other metallic and non-metallic minerals that are explored and processed in the region. In this group we can identify companies such as the gold producer AngloGold Ashanti, the cement companies Brennand Cimentos, Cimentos Liz and Lafarge-Holcim, the lime producer Mineração Lapa Vermelha and RHI Magnesita, producer of refractory materials.

The Belo Horizonte Metropolitan Region (BHMR) stands out in the service sector that stems from the fact that Belo Horizonte is the state capital and the largest commercial, financial, educational and medical center in the state.

The abundance of raw materials in the area made possible the emergence and growth of an expressive metallurgical park in the surroundings of Belo Horizonte, with many industries focused on the production of ferroalloys, casting parts, steel, capital goods and various products, added to the second largest automotive hub in Brazil.

It is also worth mentioning the Biotechnology and Life Sciences cluster present at BHMR, which is one of the two largest in the country in number of companies. Although most of the companies in this cluster are small, some stand out in this scenario, doing so nationwide in the segments in which they operate, as is the case of Hermes Pardini Laboratory, St. Jude Medical, Belfar Indústria Farmacêutica, Hyporfarma, Hipolabor and Ceva Brazil.

The Northwest of Minas has great vigor regarding agribusiness. The region has the greatest potential for expanding agricultural and livestock activities across the state. Regarding the industrial sector, the main companies are in the field of agribusiness and mineral extraction, focused on gold and zinc. Some of them are WD Agroindustrial, Bioenergética Vale do Paracatu, Cooperativa Agropecuária de Unaí Ltda., Cooperativa Agropecuária Vale do Paracatu Ltda., Kinross Gold and Nexa Resources.

The North of Minas Gerais has extensive areas covered by pastures for cattle breeding and planted forests for the production of charcoal. The region is crossed by the São Francisco River and its tributaries that stand out as important fruit producing centers.

This region also has important ceramics and clothing clusters in the artisanal production of cachaça, specifically in Salinas, a city internationally recognized by lovers of this drink for the high quality of its production.

This region has become a highlight in projects aimed at producing renewable photovoltaic energy. There are currently processes for installing plants through a protocol signed between the state government and the company Mori Energia Holding S.A.

Oeste de Minas has several important Local Productive Arrangements (Arranjos Produtivos Locais – APLs). The most relevant of them is that of footwear, which was developed around Nova Serrana and consists of about 800 companies established in that municipality, added to the other 300 located in the surrounding municipalities. The Nova Serrana APL is the main footwear hub in Minas Gerais and one of the three main ones in the country and is basically formed by micro and small companies. However, some industries are assessed as large companies, depending on the number of jobs generated.

Some of the largest companies in the West of Minas belong to the foundry APL – located in Divinópolis, Itaúna and Cláudio – and to other sectors that are part of the metallurgical industry. In the municipalities surrounding Arcos, the mineral extraction industry is mainly focused on the exploitation of limestone, which is of great importance for the regional economy.

In a beautiful national park located in Serra da Canastra, municipality of São Roque de Minas, is the source of the São Francisco River, one of the most important in Brazil and indispensable for the supply of water and electricity in the Northeast Region.

The region benefits from the fact that it is located among the three main Brazilian metropolises. This fact influences the economy, which is polarized by the São Paulo megalopolis (São Paulo Metropolitan Region – SPMR), but which also receives stimuli from the metropolitan regions of Rio de Janeiro (RJMR) and Belo Horizonte (BHMR).

The South of Minas Gerais is the main producer of agricultural items in the state, contributing more than 20% to the generation of GDP in this sector in Minas Gerais. Coffee production is the most important agricultural activity. The region is responsible for about 25% of all Brazilian production of this commodity.

In economic terms, the Triangulo and Alto Paranaíba mesoregion stands out for being the main cereal producer in the state, having the largest cattle herd and being the second most important in coffee harvest. The sugar and alcohol sector are also a highlight in the region, with around 75% of the sugar and alcohol production in the entire state being processed.

Brazil’s main producer of phosphate fertilizers is also located in the Triangulo, especially in Uberaba. This production is the responsibility of the company Mosaic, which operates in Uberaba, Tapira, Patrocínio and Araxá.

In the city of Uberlândia, Algar Telecom, an important Brazilian telecommunications company, is headquartered. This city is also home to important wholesalers that are among the largest in Brazil such as Martins, União and Peixoto. Uberlândia is the largest logistics center in the interior of the country due to its central geographical position among the main producing and consuming centers.

The Jequitinhonha Valley has the highest concentration of family farming nuclei in the state, comprising about 78 thousand farmers, which is equivalent to 9% of the state’s production.

The Valley (as it is called) presents great opportunities in the mineral extraction sector, being explored by the “Cia. Nacional de Grafite e de Lítio” (National Graphite and Lithium Company) through the Brazilian Lithium Campaign (Campanha Brasileira de Lítio – CBL). Although CBL is already exploring lithium, the mineral reserves in the area present potential for further exploration.

It is also possible to highlight the investments of the company Sigma Mineração, which brought about R $ 500 million to produce lithium oxide, a material used in electric car batteries.

The Mucuri territory occupies an area of ​​23.2 thousand km², with 27 municipalities and a population of 370 thousand people. The Mucuri River is a component of the hydrographic basins of the Doce, São Mateus, Itanhém, Jequitinhonha, Peruípe, and Itaúnas rivers, and reaches 60% of the municipalities in the region.

The main companies installed in the state are in the region, such as the steelmaker Usiminas, Aperam South America and Celulose Nipo-Brasileira S / A (Cenibra). The great availability of steel inputs is an important factor for the concentration of the metallurgy production chain and this context allows the application of great advances, improving the sector.

It is worth mentioning the presence of stainless-steel processing companies, which use the raw material supplied by Aperam South America, the only producer in Latin America of stainless and silicon flat steel.

In Zona da Mata, the main agricultural activities are the production of coffee, especially in the neighboring municipalities of Manhuaçu, and the creation of dairy cattle and pigs, concentrated in the vicinity of Ponte Nova.

The most representative industrial segments in the region are metallurgy, textiles and clothing, furniture, and food. The Zona da Mata industry developed from the installation of spinning and weaving factories. Currently, the textile and clothing chain continue to play an important role in many municipalities in the region.

As for the metallurgical chain, including transport material, Zona da Mata has large production units of the companies Votorantim Metais Zinco, ArcelorMittal Brasil, Codeme Engenharia S / A, Dow Corning Silício do Brasil S / A, in addition to the Mercedes Benz assembly plant , in Juiz de Fora.